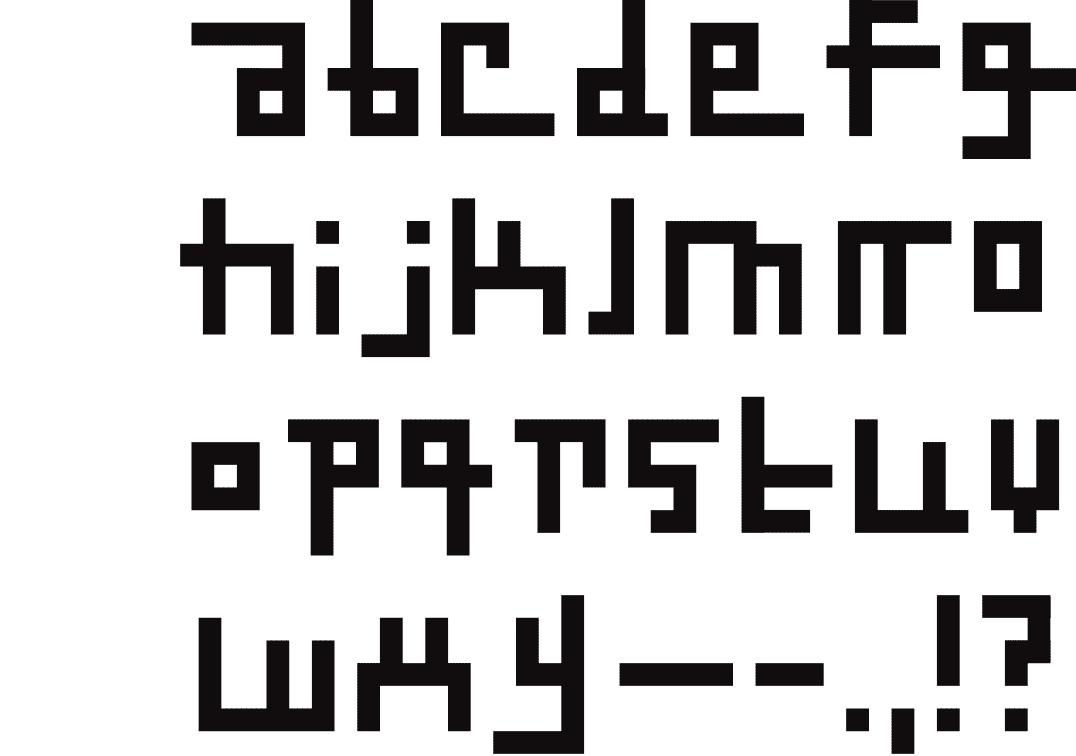 DESIGNED ON A GRID

[2019] I was commissioned to realize the logotype for a department of a French university. In one of the proposals, I made a grid as the basis for drawing the letters.
Eventually, another of my proposals was chosen. Nevertheless, I was so enthusiastic about this grid that I continued to build on it.
Countless fonts were already designed on a grid, so I wanted to use this grid as a basis to play freely, with the intention to bring the letters to the edge of legibility. 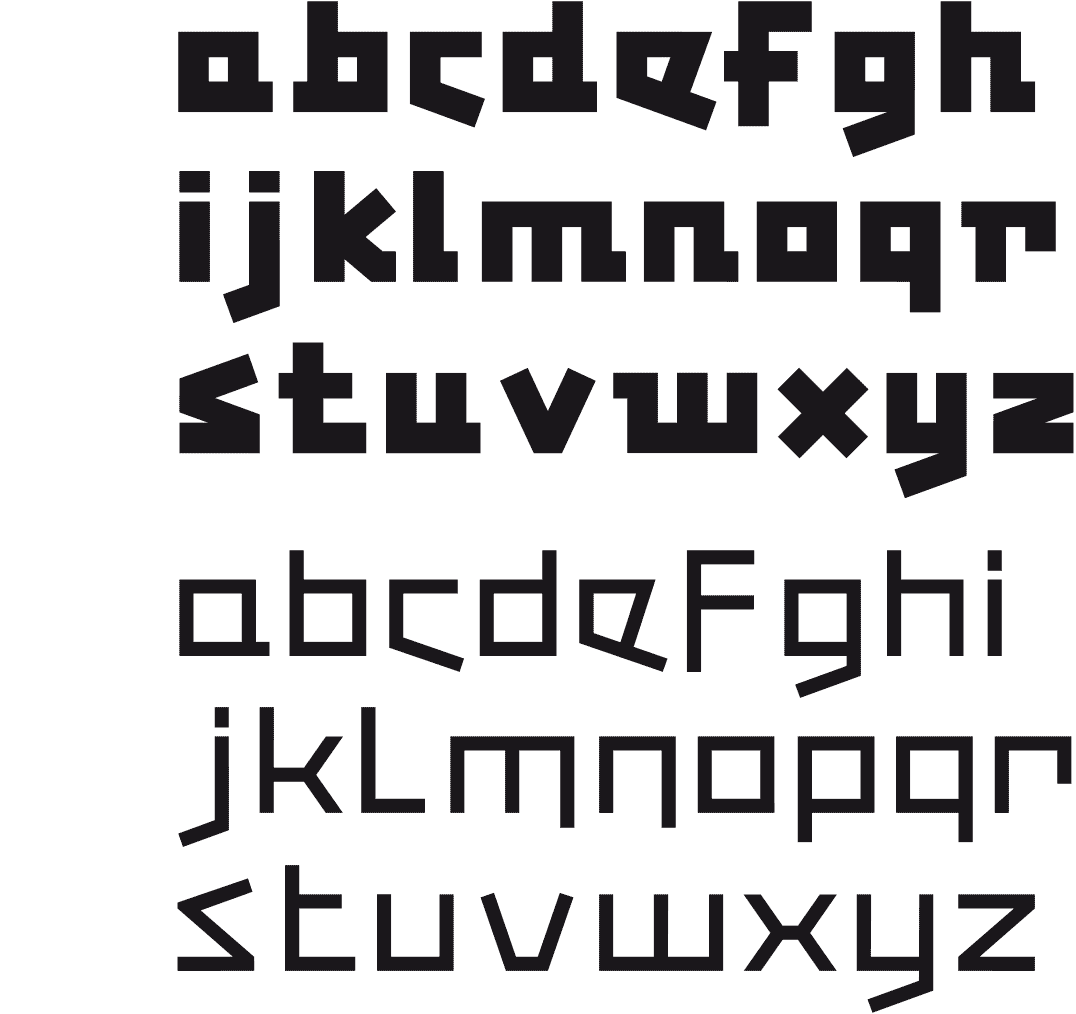 [2019] This typeface was created as I was designing a poster for the exhibition «Jacques Tati & Friends» in 2009, a tribute to the famous French director.
In order to have a matching font I drew the letters in a ‘creative’ Bauhaus style. When cleaning up, ten years later, I got the first sketches back in my hands. So, I did some further work on them.
This font is now available in a thin and a thick version. One peculiar aspect is that they differ in terms of drawing. I thought that each thickness should have its own specificity, and not be a mere variant. 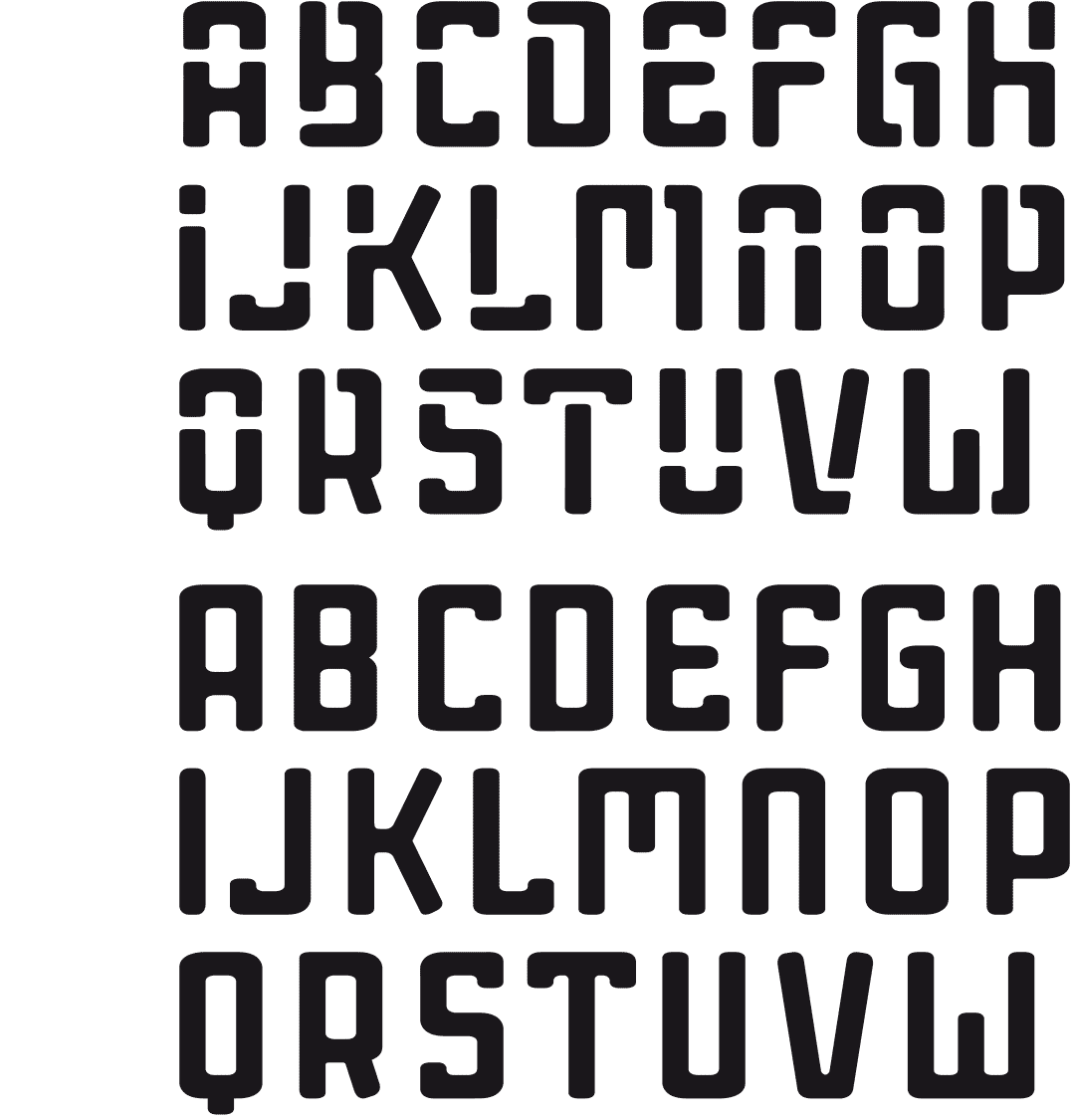 CUT OUT IN METAL

[2017] I was asked for a fitting font to cut out of a metal base of a three-dimensional work. I browsed through stencil fonts but didn’t find anything useful. Most of them have rather wide characters and are not very original. As usual my playfulness (or was it vanity?) got the better of me and I just had to rise to the challenge.
I then realized a regular font from this stencil font. 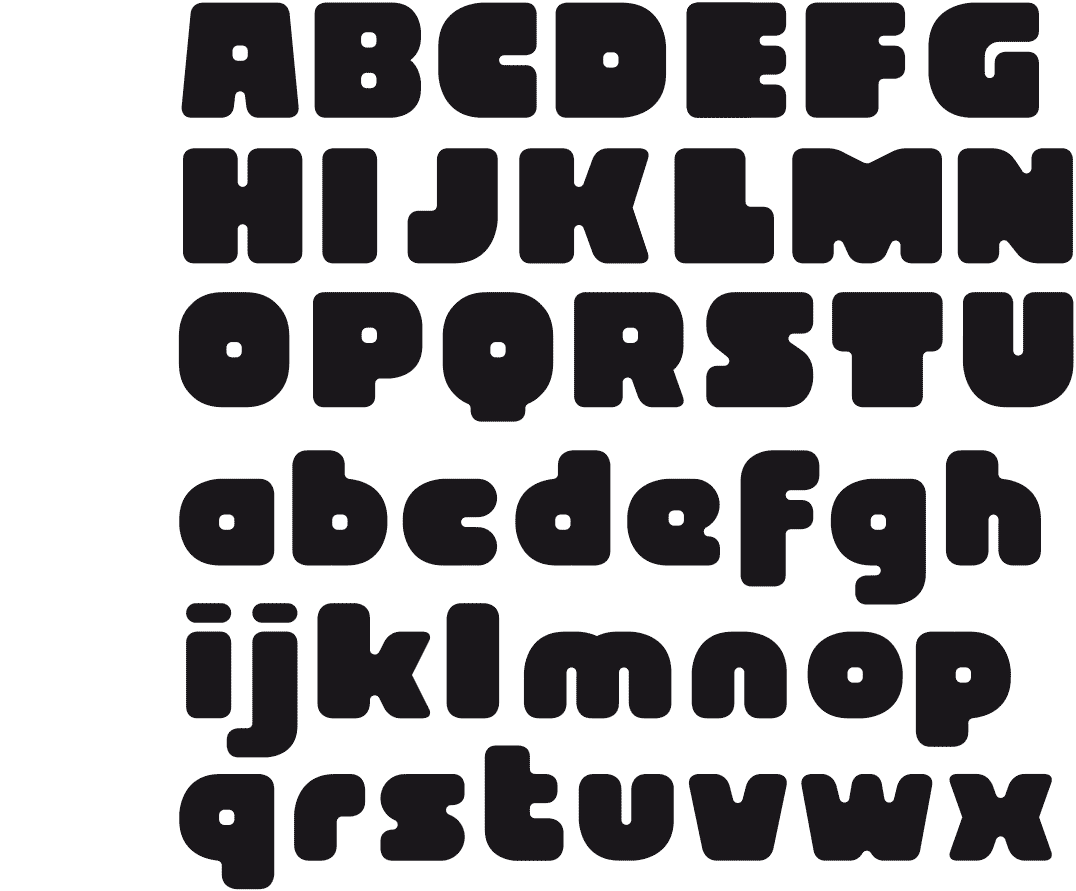 [2016] Sometimes, for no particular reason, I feel like making a font. This was the case with this typeface. I wanted to see where it would bring me, taking a rounded square as a basic shape. With the intention to achieve an extremely thick and solid font, with very small eyes. 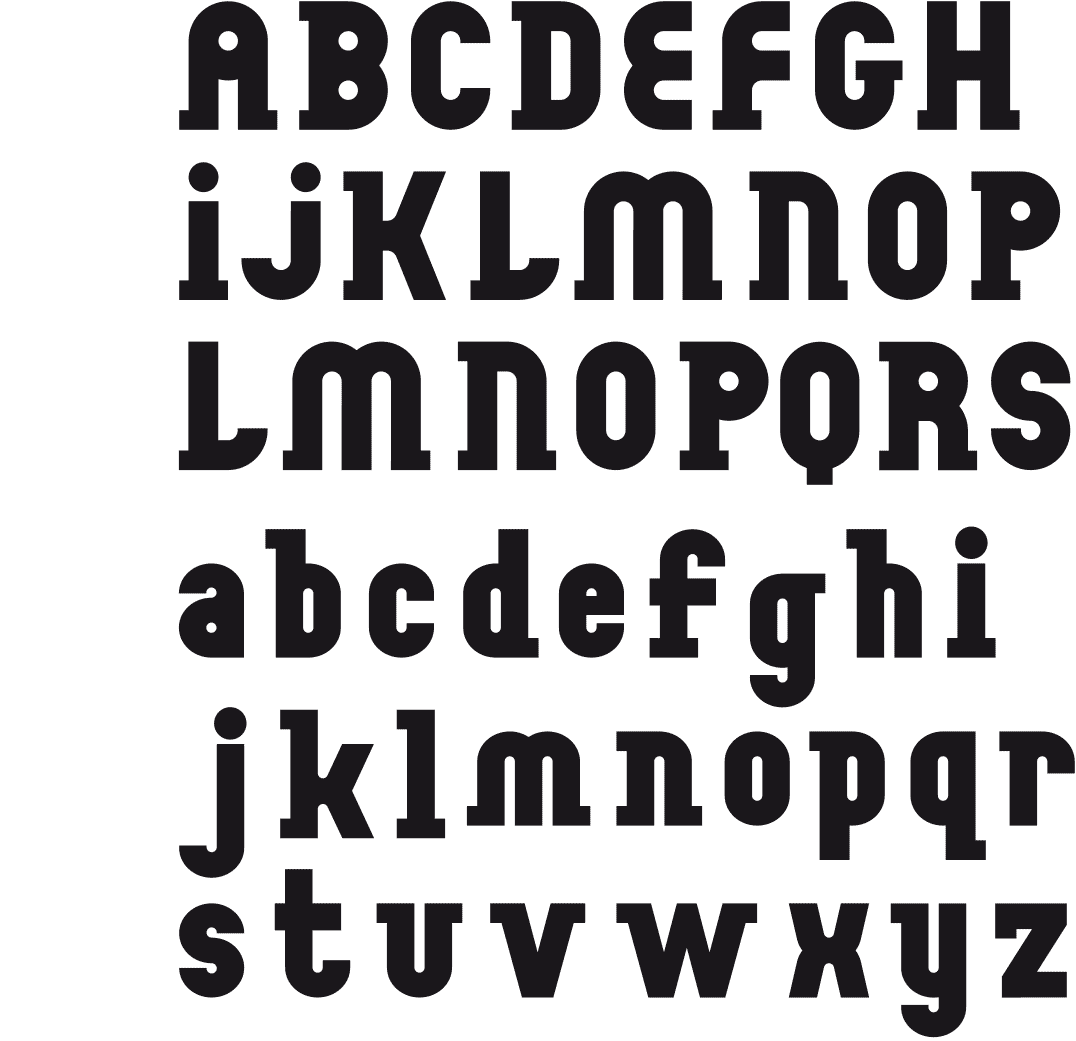 [2015] I was playing with round and straight shapes, making abstract compositions with them. Eventually this resulted in a font whose characters consist of four elements. In compiling the characters I gave each of these forms their own color, to distinguish them from one another.
The final result is a heterogeneous and playful font, on which I worked with great pleasure. 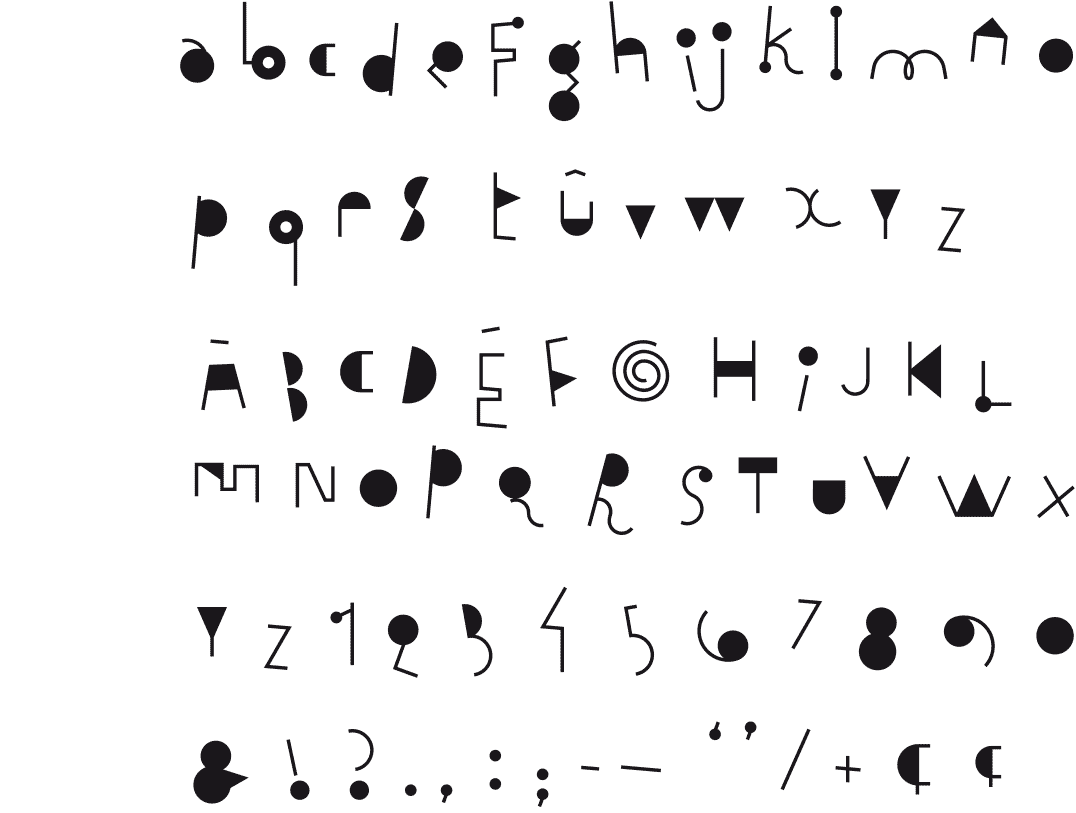 [2013-2015] The design and fine-tuning of the Struktura Font, highly engineered fonts began to take its toll, my enthusiasm to continue had crashed ...
I wanted to go for a more playful and looser approach. Because this font gives a rather strange alien impression, reminiscent of a kind of hieroglyphics, I gave it a name that refers to the Roswell incident. 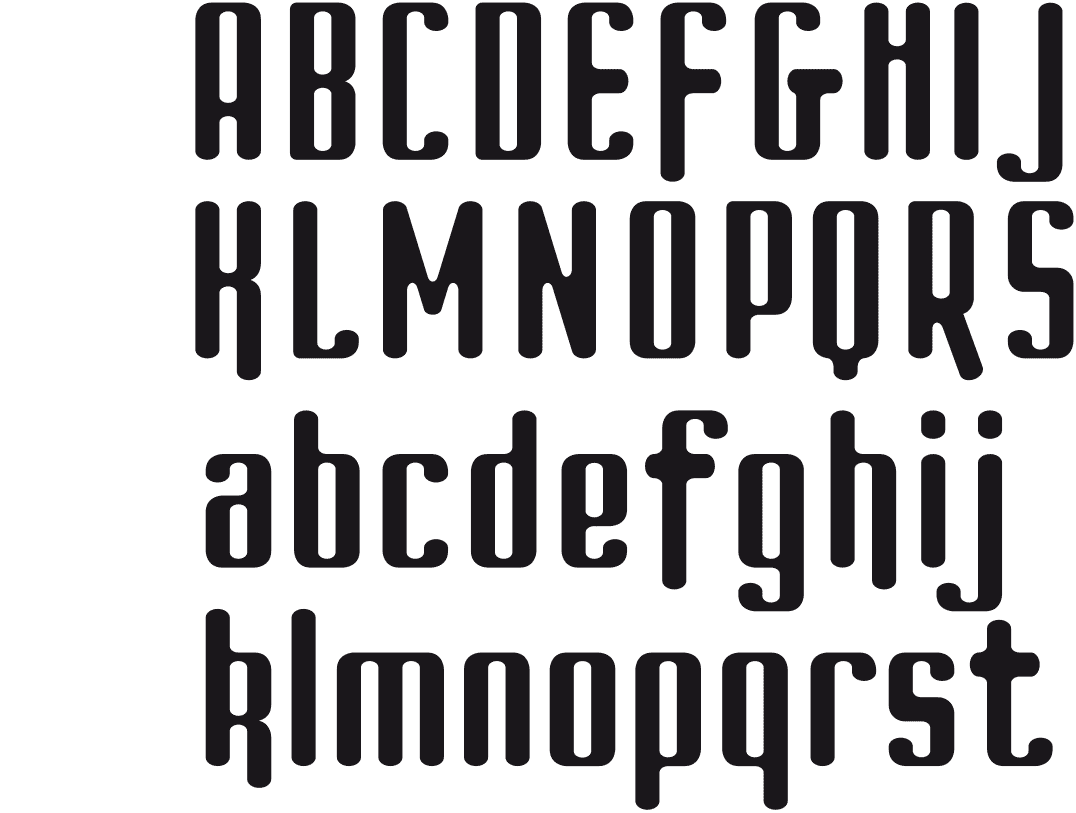 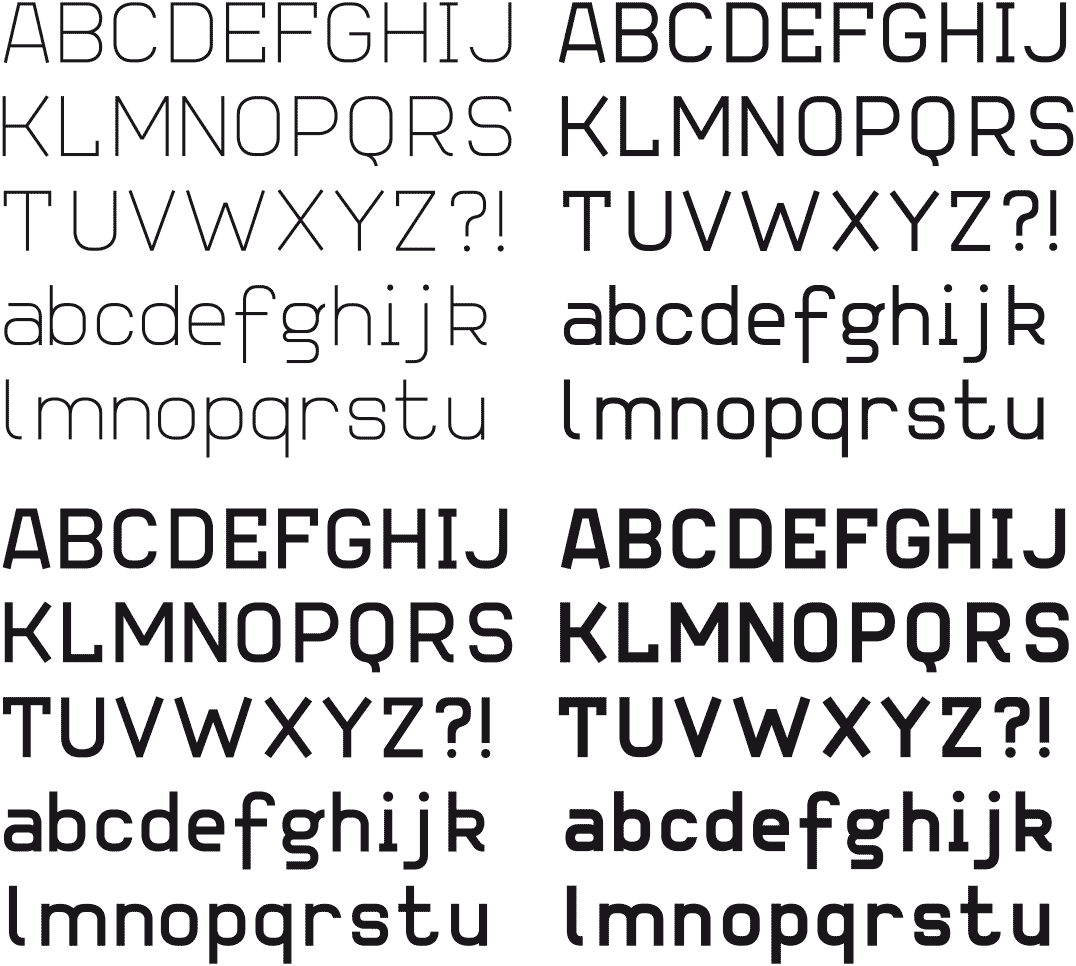 […-2015] For several years I have been trying to design a text font. I know, it’s aimed very high. Especially for someone like me who works in several disciplines. While designing this Struktura font I had landed on a rollercoaster of doubts and hesitations, and at the same time hope.
Occasionally there was satisfaction but this was mostly of very short duration. It has taken several redesigns of the font, even of all weights, till the shapes eventually formed a whole. 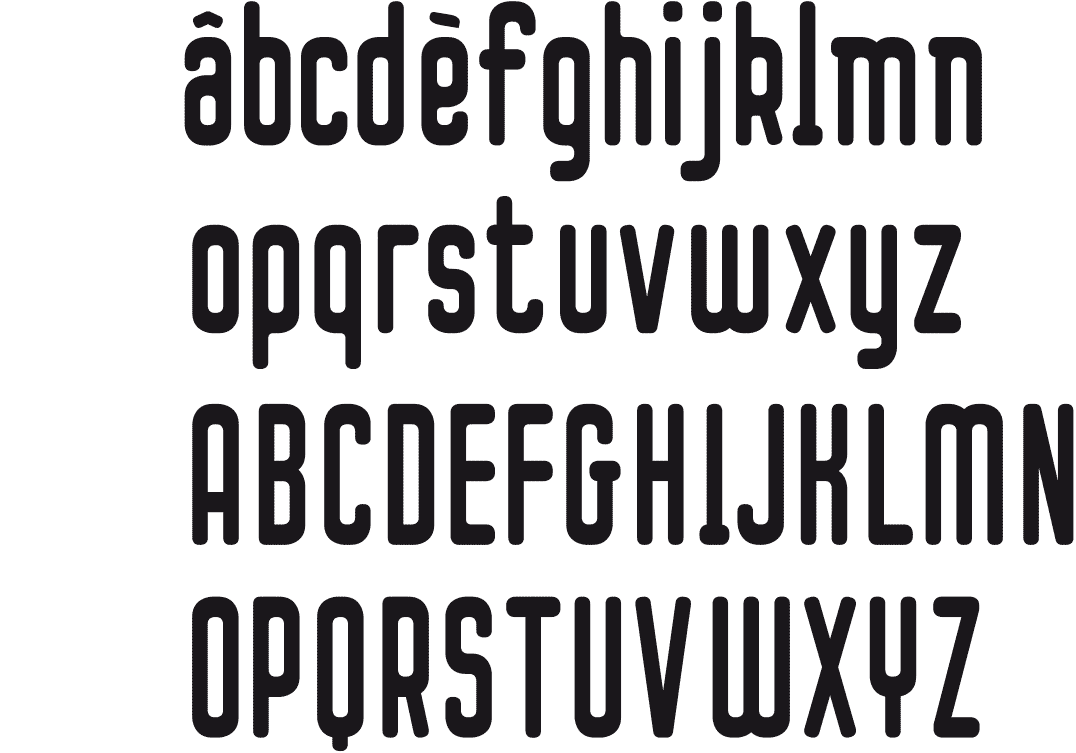 AN NEAR LOST VERSION

[2012] Sometimes I am so deeply immersed in what I’m doing, that I get lost, as happened now. During the stylization process of the Blackblanc font I had, without realizing it, moved farther and farther away from the original font shape. Eventually it was no longer compatible with the original Blacknoir font. So I had to start it all over again ...
In retrospect, I noticed that this version had potential as a separate font. 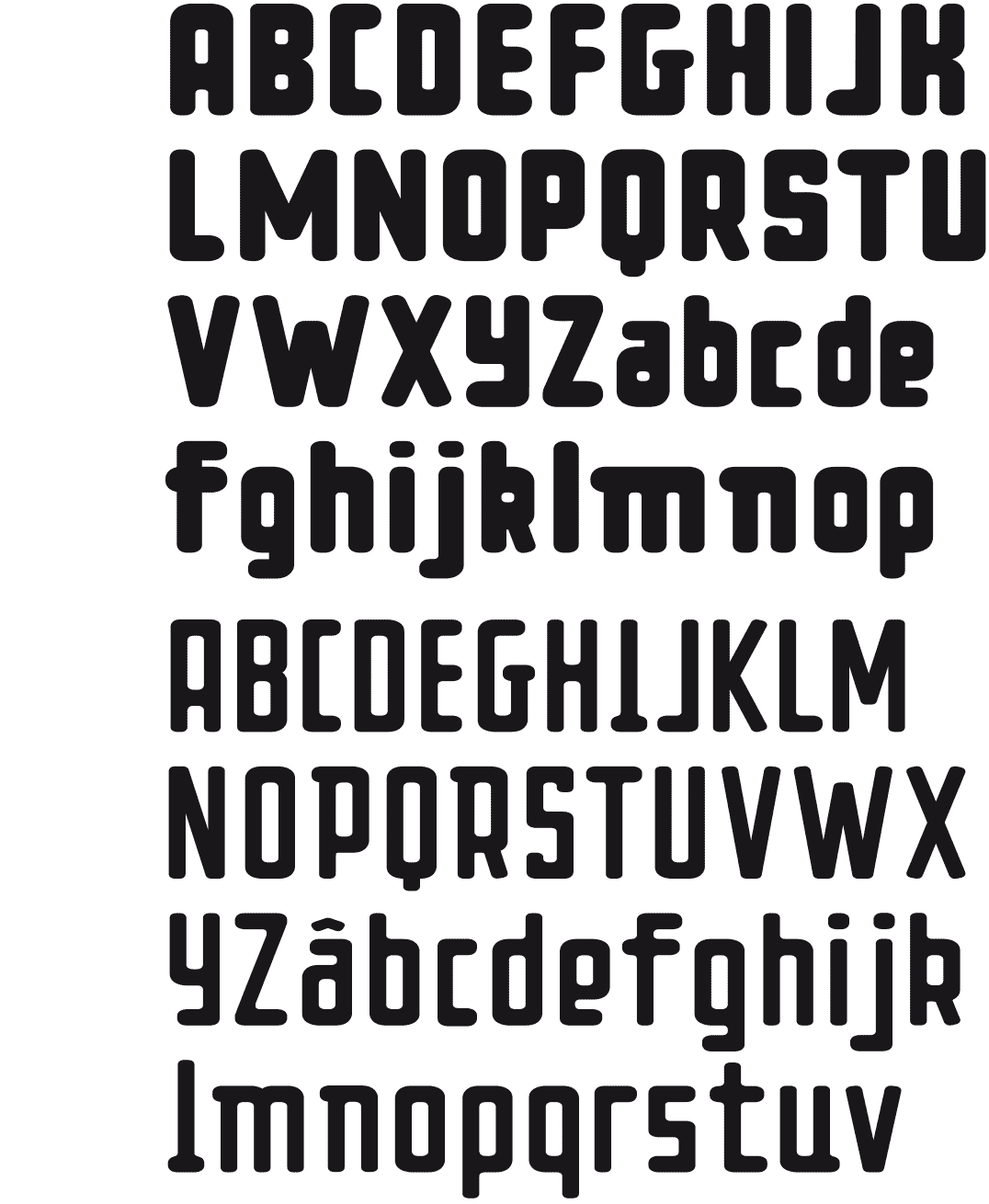 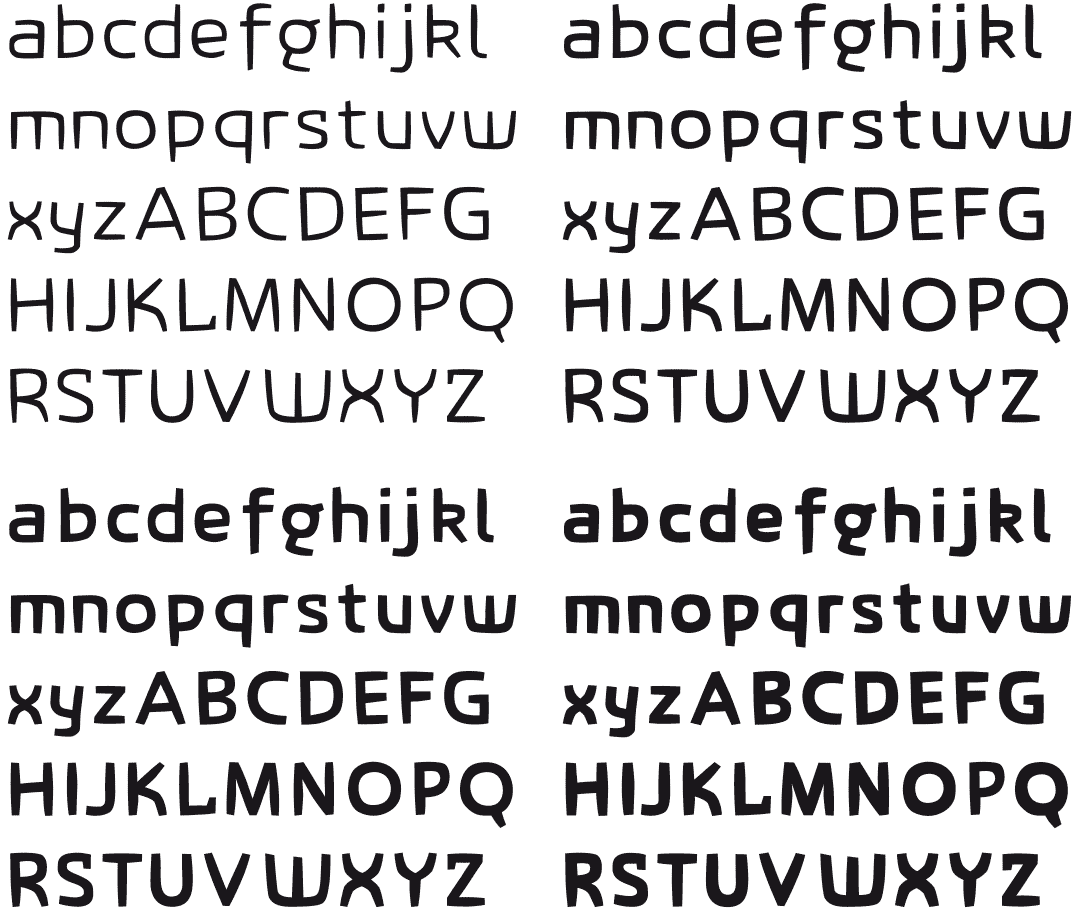 [2005-2009] I made the first drafts of this font in my sketchbook. This ‘handmade’ approach gave the letters curved lines and a spontaneous look. Transferring it onto the computer I put the Frutiger font under-neath as a safety net, never copying it. I wanted this font family to be readable, even in small heights. 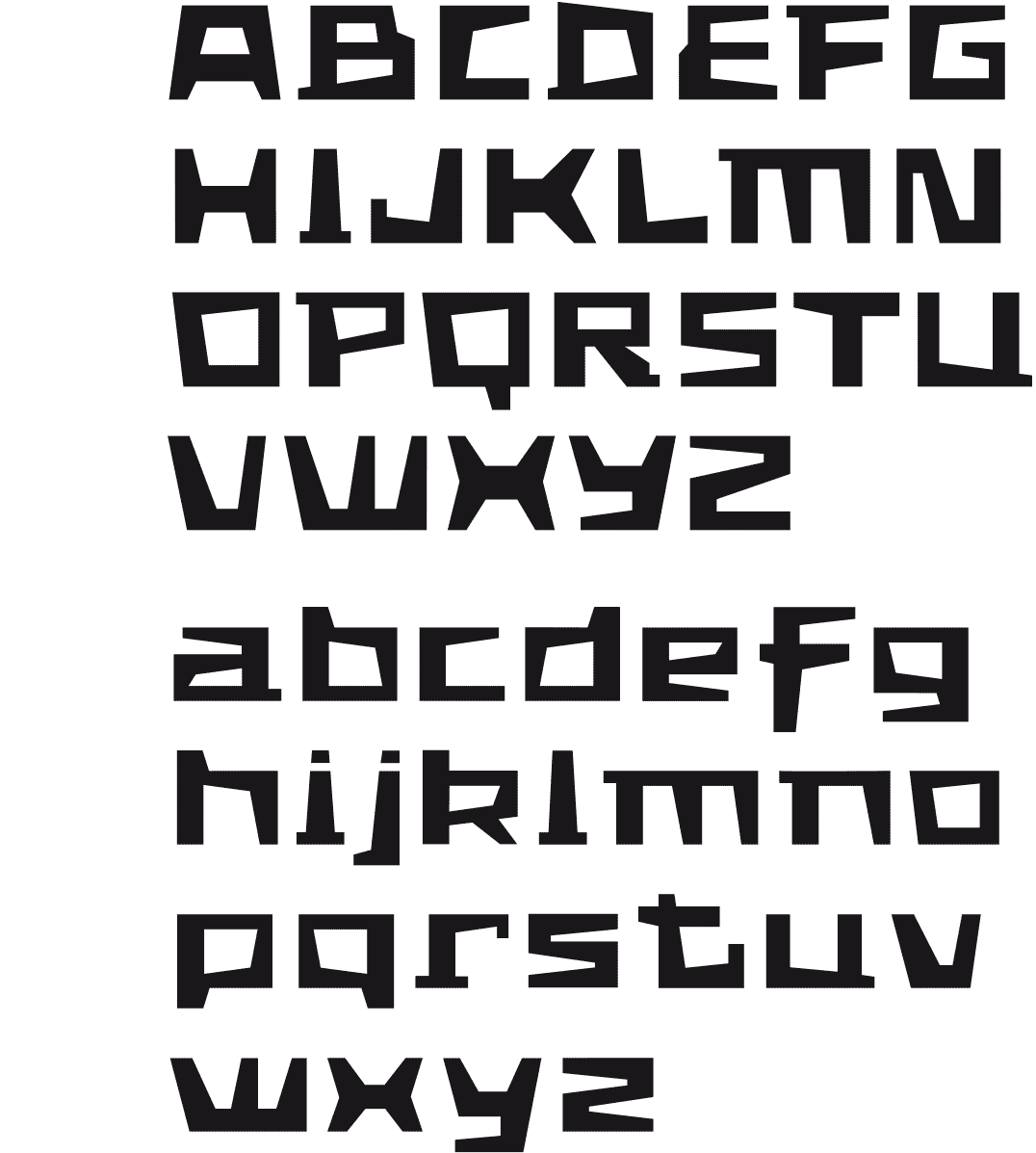 [2003] The request of an architect friend to create his business card, incited me to design the letters of his name in architectural shapes, the result being this constructivist looking font that is inspired by life in big cities.
The ArchieTeck-font has broad basic shape, straight cutout forms and small outbuildings. 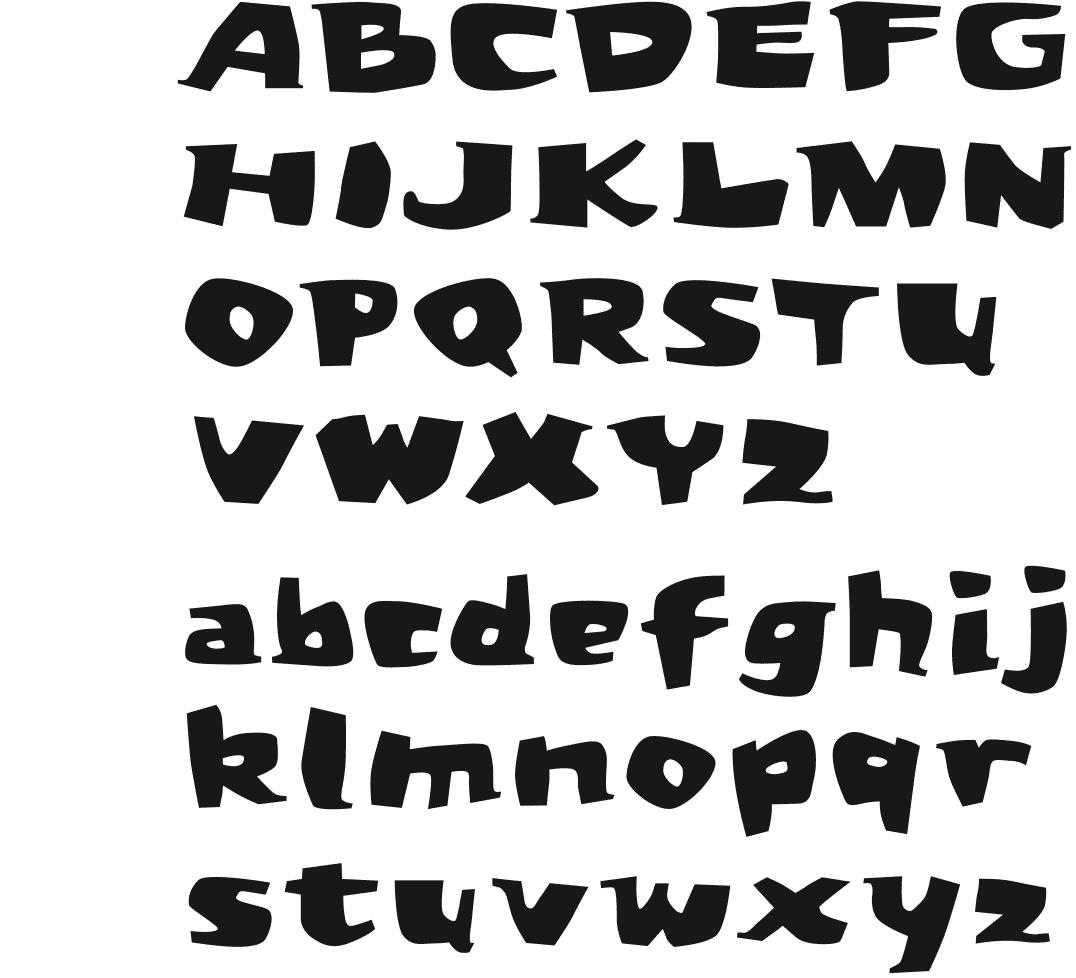 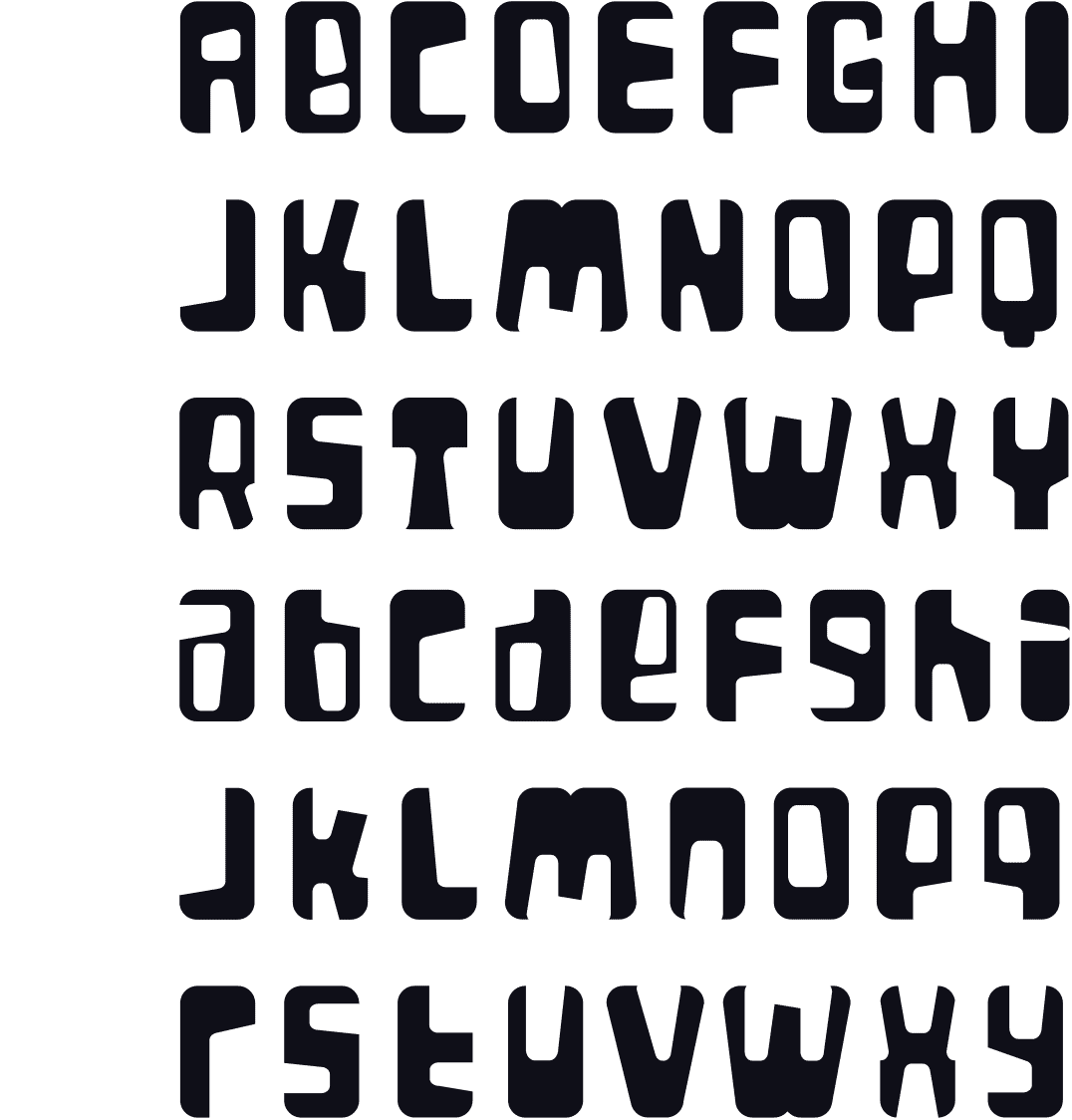 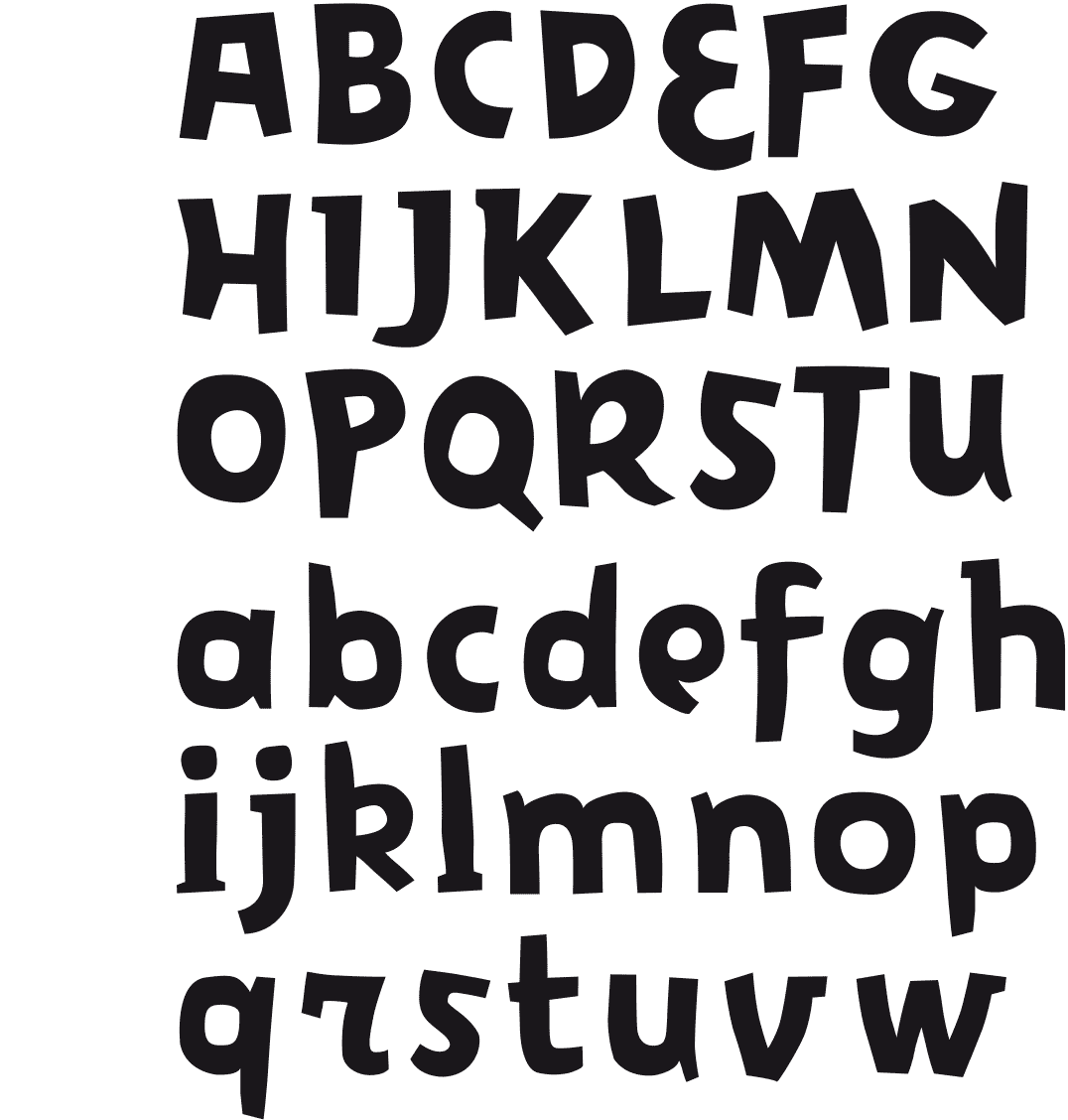 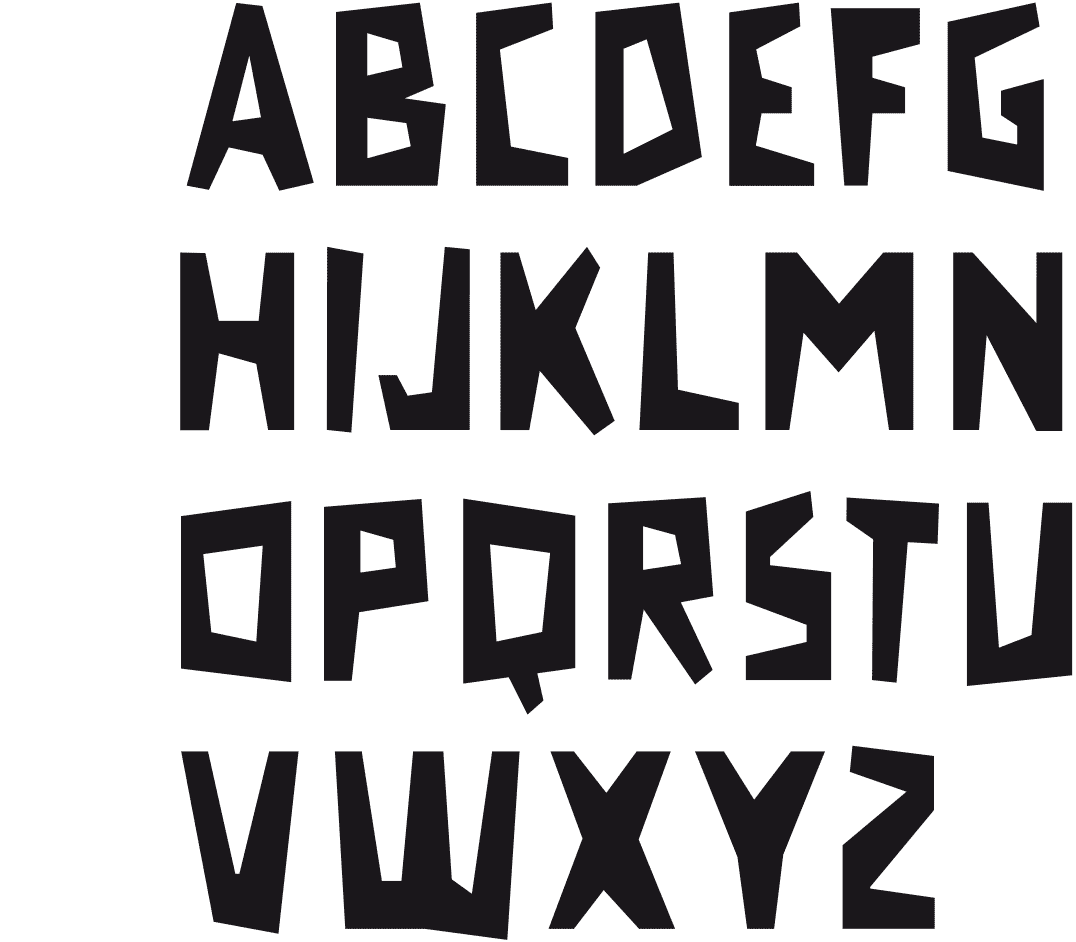 [1998] Razor Dina is, as the first part of his name suggests, a font carved in black paper. It is composed exclusively of straight-cut shapes. It has become an angular, unstable and aggressive type. It’s the first font I made this way. 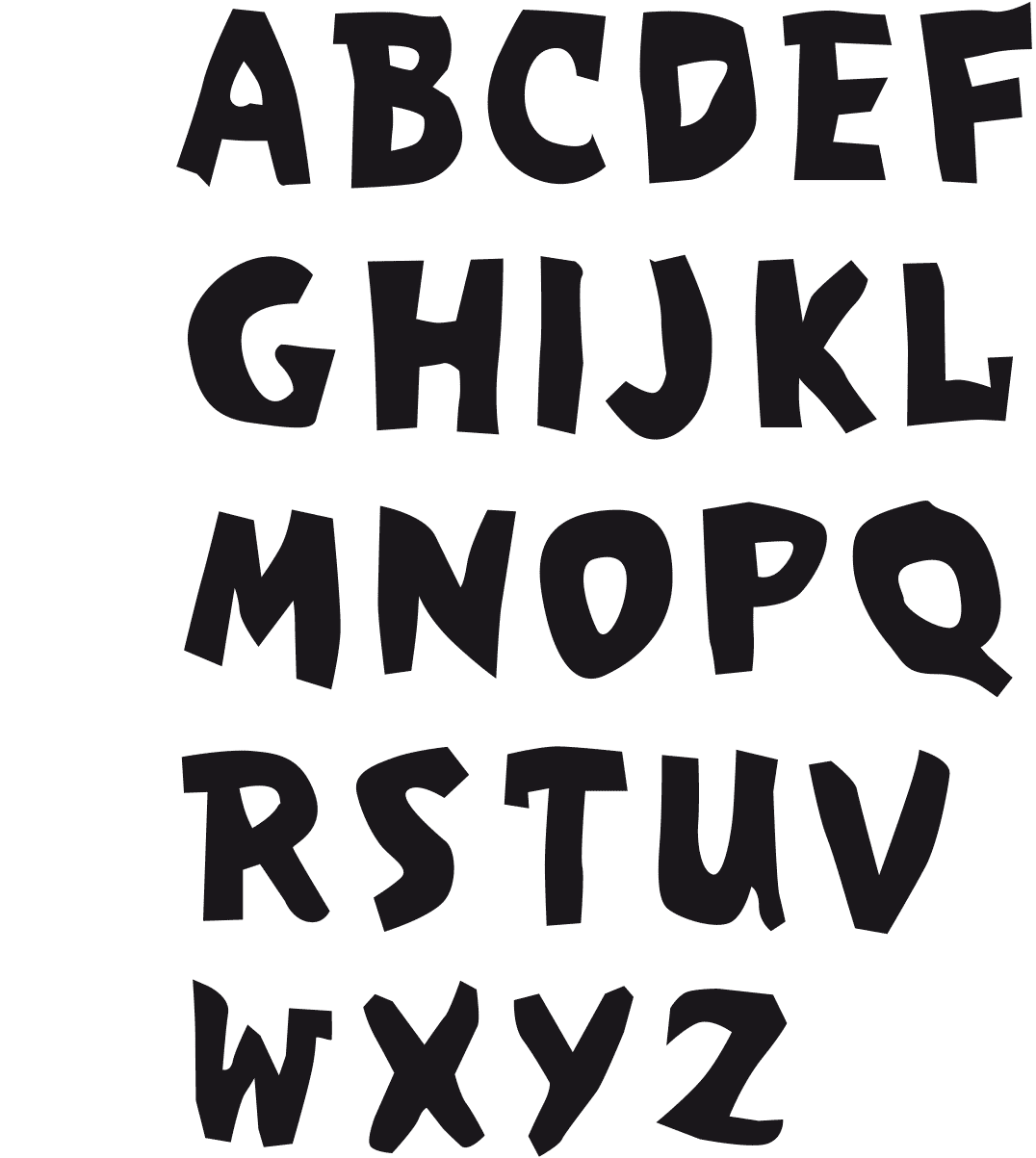 [1997] This font came about in a very natural way, one day I was using the mouse to draw a poster in Illustrator. I had to put in a title and drew it in quickly, just to see the size. That was the start of this font. In the end, it looks like a linocut type. It makes me think of the wooden letters at the entrance of ranches in Western movies. 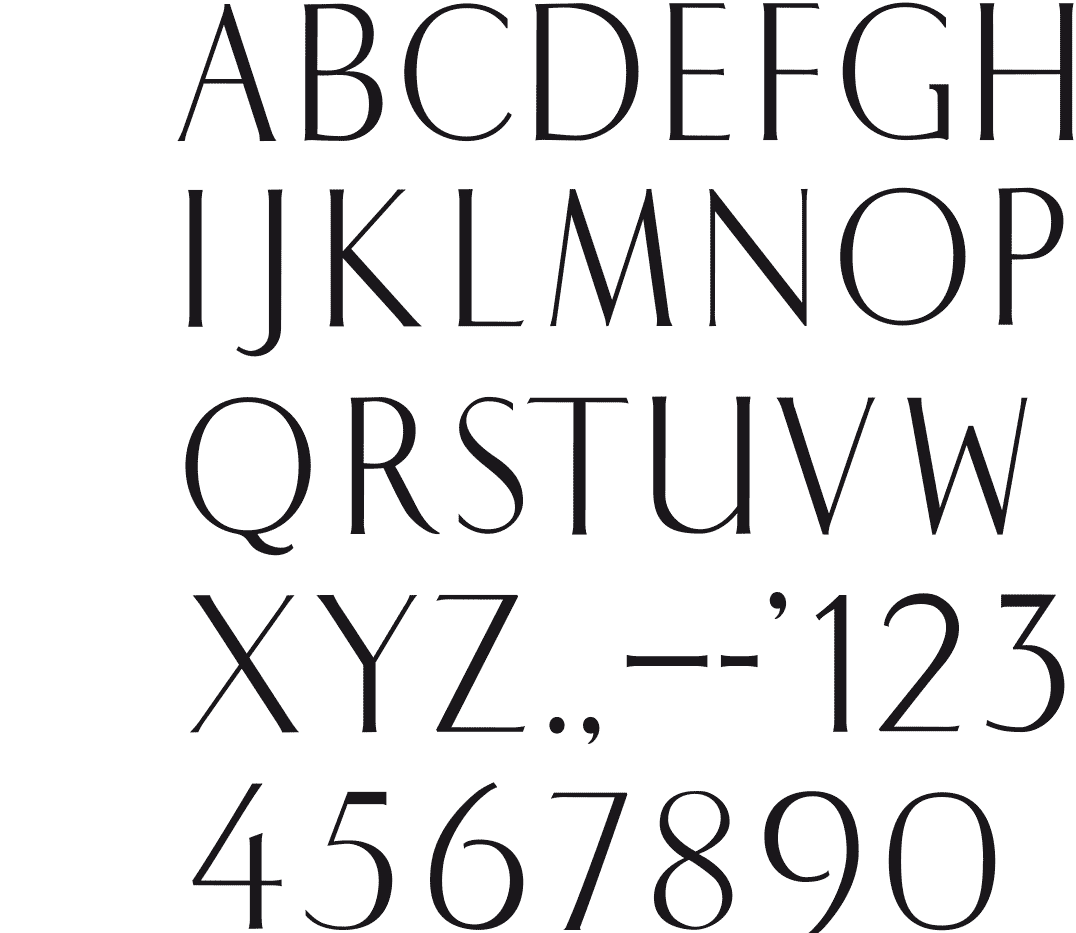 [1996] I was looking for a suitable typeface which to set the names of a series of carpet brands, and found nothing elegant and fine enough. So I thought of this type by Jacques Richez seen on a poster of the 1958 World Fair in Brussels. The font is classic of view and shows great skill. Especially, that posters until the 60s, were realized in lithography, and texts were drawn by hand or transferred using templates. The typeface has a nice tension between the different forms, it is gracefully styled especially when used in large sizes. It could be a derivative of a calligraphic as used by script sculptors.
To obtain certainty I submitted this issue to the typographer and graphic designer Dooreman. His answer:  In my opinion it’s an amalgam of several fonts. We find the typically U in ao Perpetua, the B and R are very antique (Garamond, Van Dijck, ...) but above all it is a hybrid, not a true serif. The ‘serifs’ tend to Optima. I suppose it’s an original design. 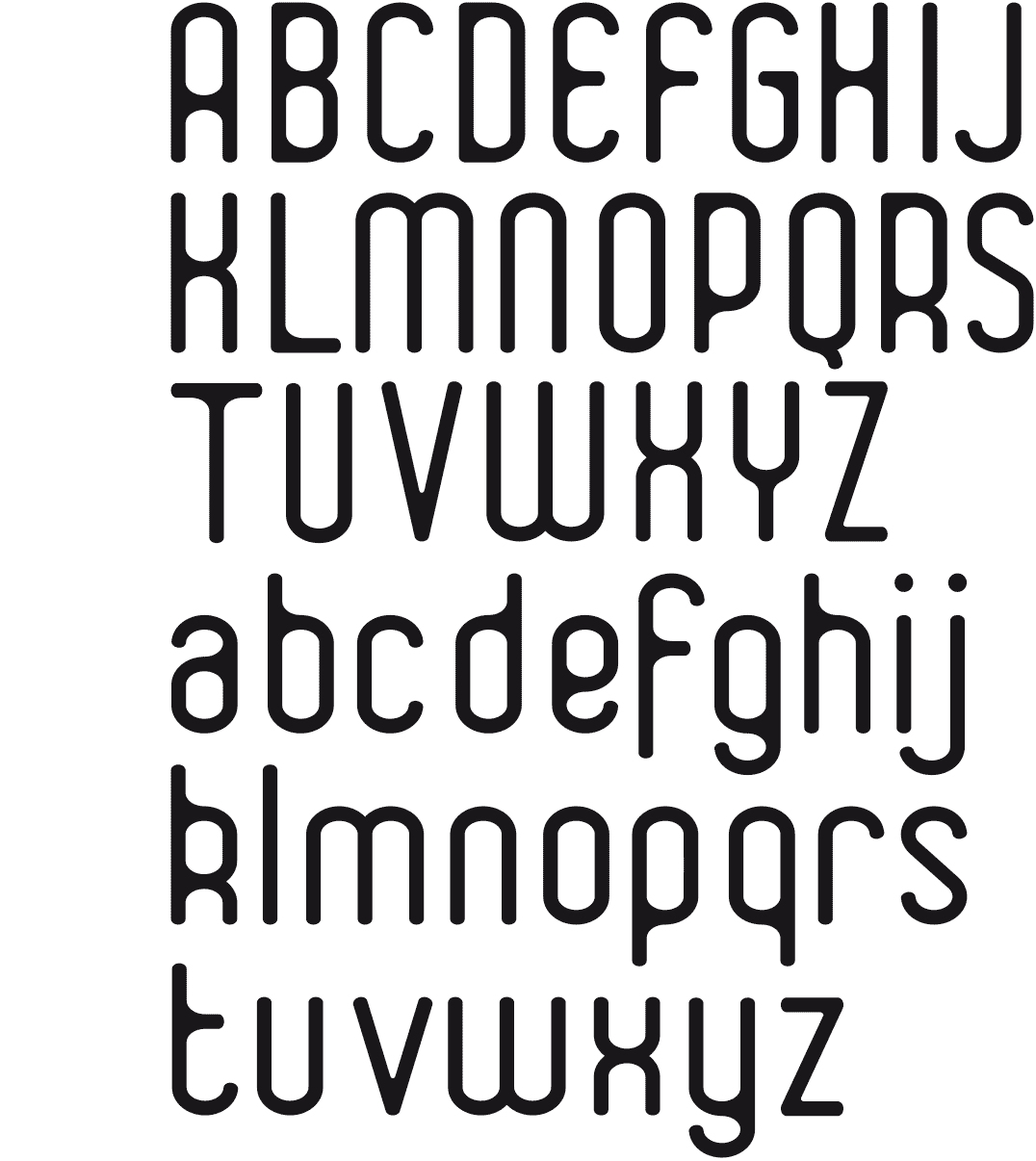 [1993-2015] The first version of this typeface was drawn around 1993. As I was dissatisfied with the design, I let it gather dust it in my drawer, until I radically redesigned it in 2015. It’s a typeface with rounded ends and round shapes, referring to typefaces from the seventies. 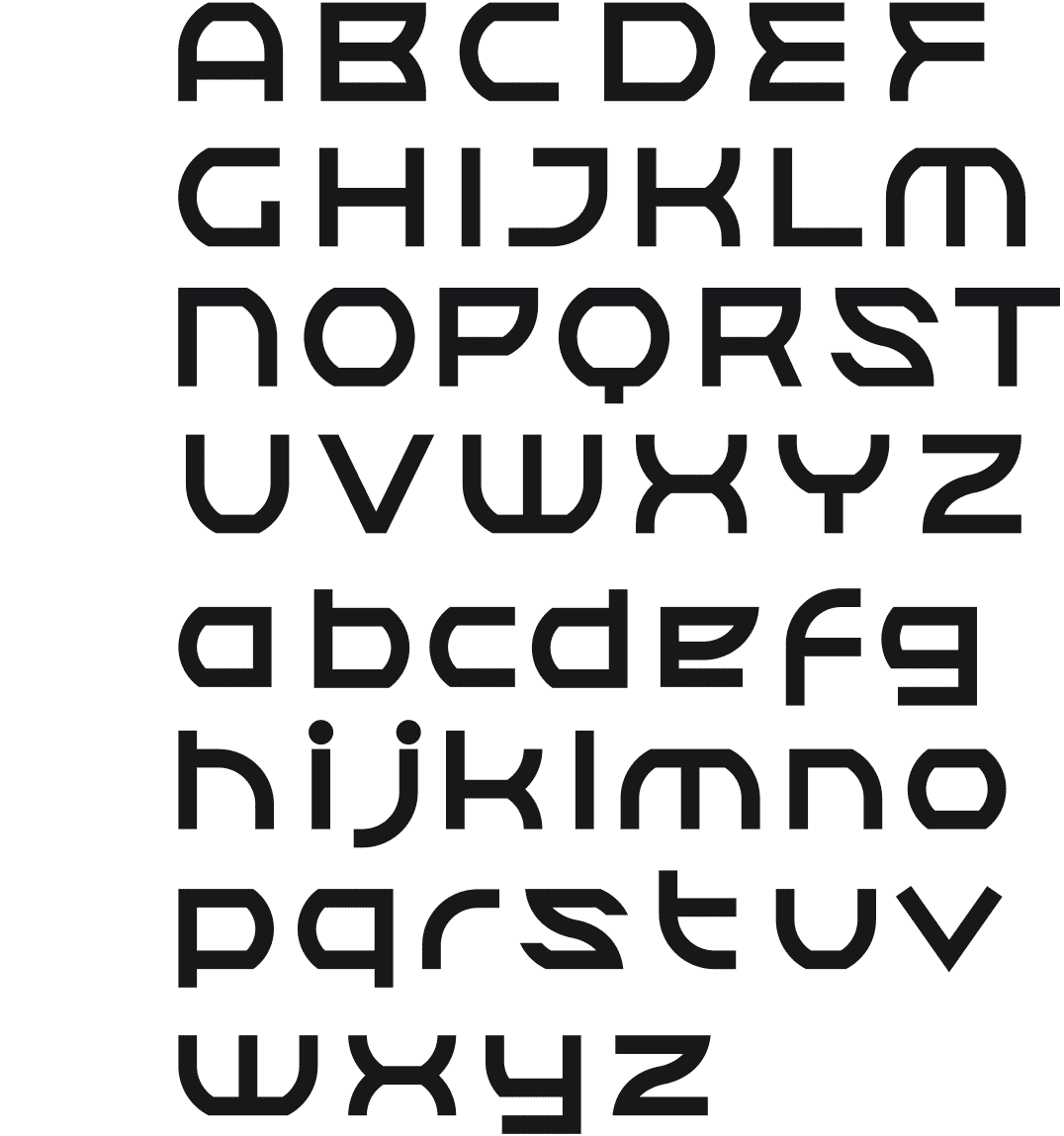 [1992] A solid font with a nod to the Russian posters from the 30s and 40s. There are no flowing forms, the letters are highly structured and abruptly change from round to straight shapes. A first version of the font was not satisfactory.
A makeover gave the font unity and strength. 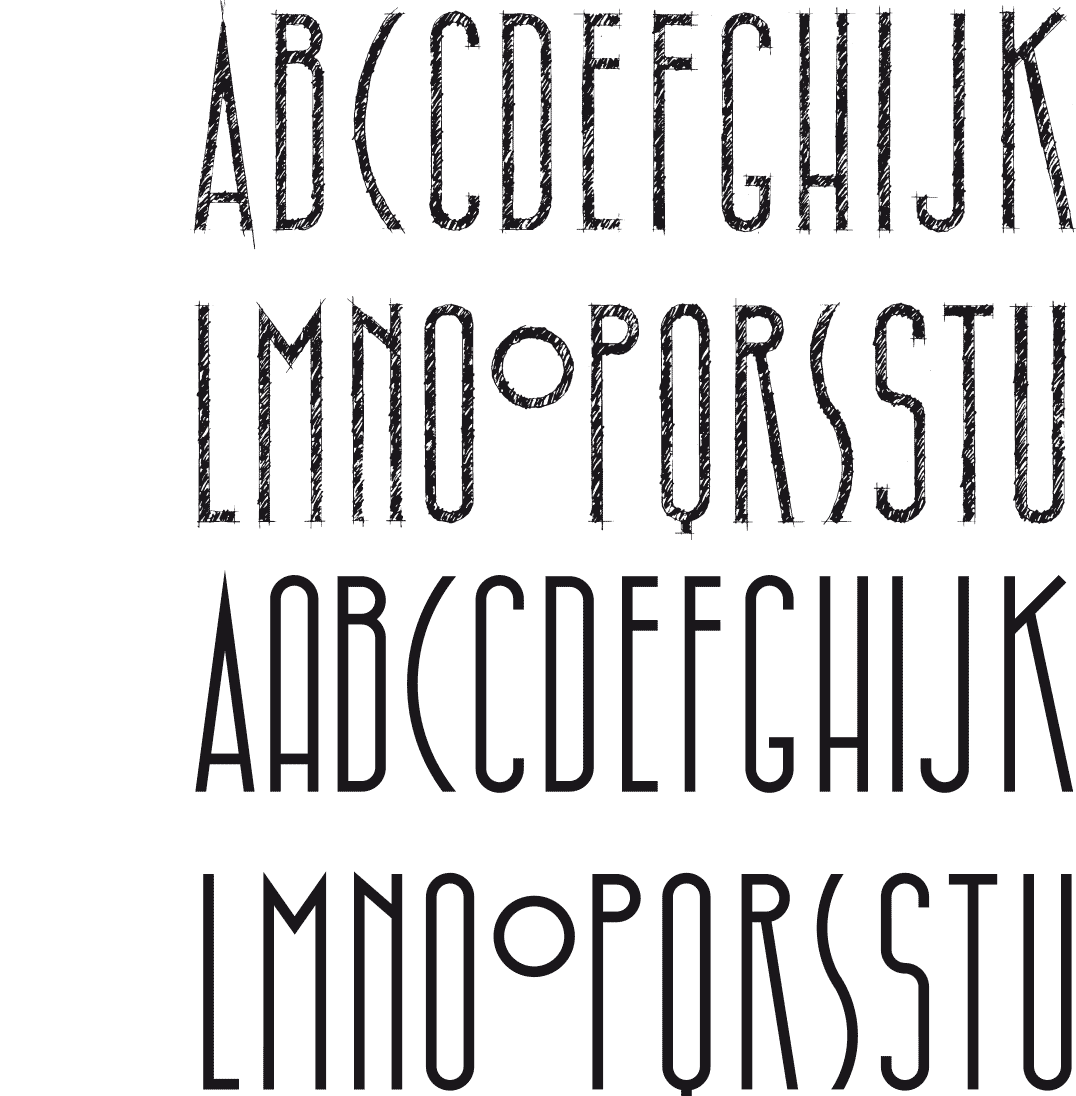 The first characters of this font were designed to serve as the title of the poster. It’s a tight and narrow font, all drawn by hand, even the hatching. It was drawn on tracing paper with a 2B pencil, at a size of 7 cm. Afterwards I felt the need, as a contrast, to design a straight version of this font. 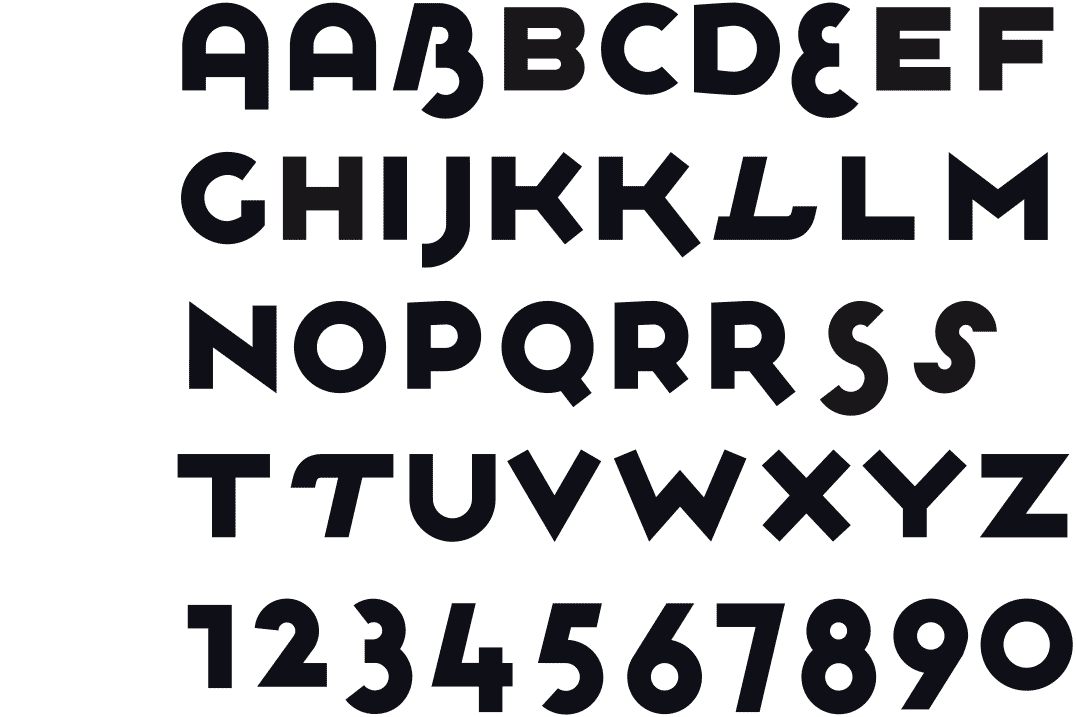 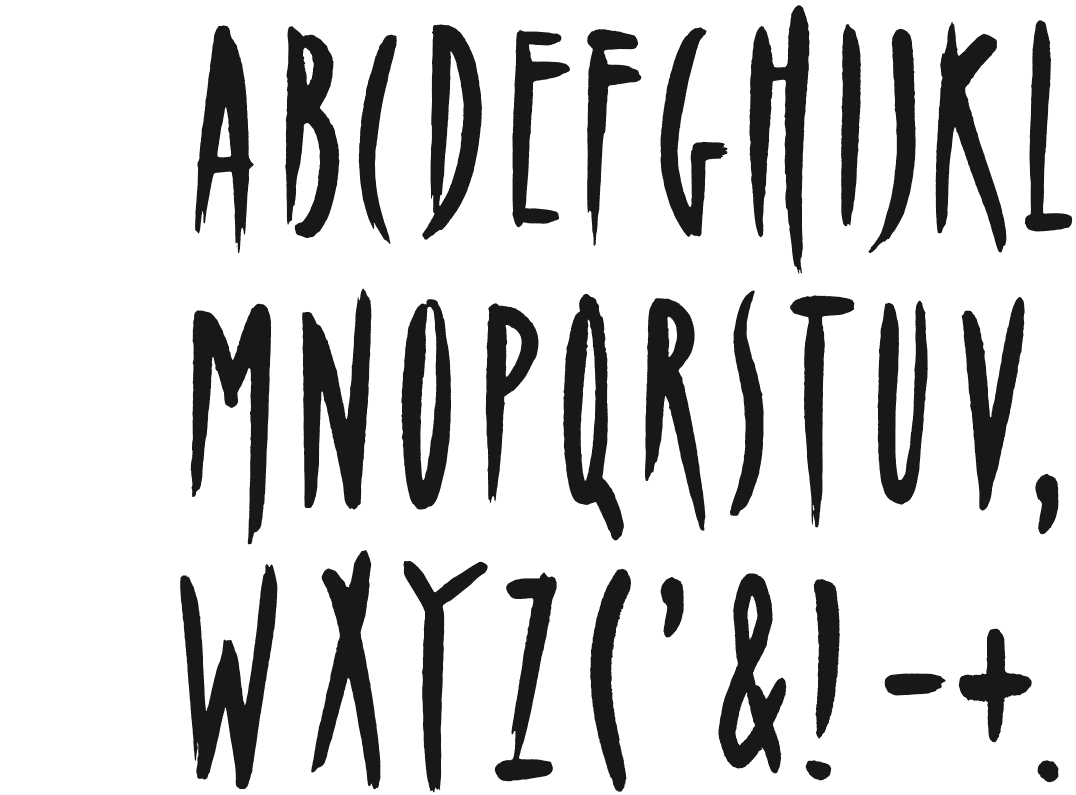 [1986] The starting point for this font was a little card I made to accompany a birthday gift for Frida, my love and life partner. My feeling is that it has the immediacy of Japanese calligraphy. 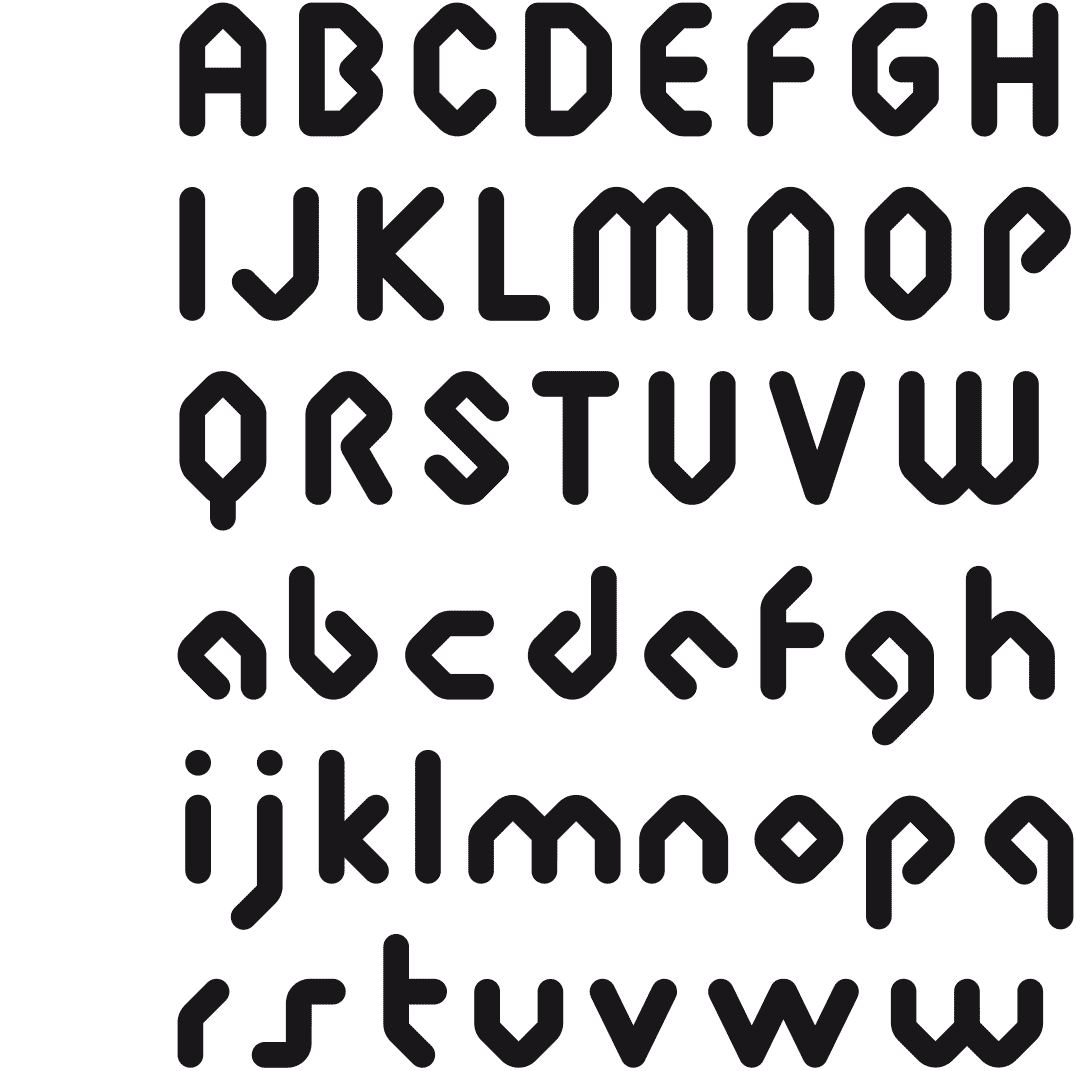